Three Traits To Be Mindful Of

Some people are good listeners. Some not so much. Many like to hear themselves talk. I have often said, “God gave us two ears and one mouth. Get the message? We should listen twice as much as we talk.”

Do you know people who talk too much? Sometimes it’s hard to get a word In edgewise because they are talking so much and sometimes so fast. Sometimes all you have to do is say an occasional “uh huh” and they just continue on. Don’t misunderstand me, there are times when people we know need to vent. That is a very important time to just be there for them. Be a shoulder to lean on. Provide a listening ear. However for the sake of this blog post I am not referring to these people but rather to those who just talk all the time.

Do you know people who are angry? They fly off the handle at things they have no control over. The anger they react with makes no sense and often concerns others around them. You, perhaps, have heard of people so angry they hit walls, they yell and in extreme cases they hit others. They have an issue with anger management. They have a problem with self control.

James addresses these issues. He does so quite clearly, I might add.

[19] My dear brothers and sisters, understand this: Everyone should be quick to listen, slow to speak, and slow to anger, [20] for human anger does not accomplish God's righteousness.

We should be quick to listen. This is an unusual command, with almost a trace of humor in it. It’s like saying, “Hurry up and listen!” It means that we should be ready to hear the word of God, as well as all godly counsel and admonition. We should be teachable by the Holy Spirit.

We should be slow to speak. It is surprising how much James has to say about our speech. He cautions us to be guarded in our conversation. Solomon would have agreed heartily with James.

The one who guards his mouth protects his life; the one who opens his lips invites his own ruin.

When there are many words, sin is unavoidable, but the one who controls his lips is prudent.

Even Solomon made it abundantly clear. Compulsive talkers eventually transgress. It is imperative we be mindful of our words. Words mean things. Even how we say them.

We should be slow to anger. A man who is quick-tempered does not produce the kind of righteousness which God expects from His children. Those who lose their temper give people a wrong impression about Christianity. It is still true what Solomon said in Proverbs 16:32.

He who is slow to anger is better and more honorable than the mighty [soldier], And he who rules and controls his own spirit, than he who captures a city.‭‭

God wants us to have the best life possible. A life filled with love, compassion, and self control. Incidentally, self control is a Fruit of the Spirit that should be a part of each believer’s life.

Let’s be quick to listen, slow to speak and slow to anger. Let’s cooperate with God as He does His work in us.

Ray
Thanks for taking your time to read and share this blog. If you know of someone who would be encouraged by this blog, please feel free to forward  a link or use the icons below to repost or forward this blog.
Check out my website at www.rayspellbrink.com
Posted by Ray Spellbrink at 12:30 PM No comments:

Why So Many Denominations?

We Are living in unprecedented times. The division. The hostility. Apathy is running rampant. Times are challenging.

[10] Now I urge you, brothers and sisters, in the name of our Lord Jesus Christ, that all of you agree in what you say, that there be no divisions among you, and that you be united with the same understanding and the same conviction. [11] For it has been reported to me about you, my brothers and sisters, by members of Chloe's people, that there is rivalry among you. [12] What I am saying is this: One of you says, "I belong to Paul," or "I belong to Apollos," or "I belong to Cephas," or "I belong to Christ." [13] Is Christ divided? Was Paul crucified for you? Or were you baptized in Paul's name? [14] I thank God that I baptized none of you except Crispus and Gaius, [16] I did, in fact, baptize the household of Stephanas; beyond that, I don't recall if I baptized anyone else. [17] For Christ did not send me to baptize, but to preach the gospel-not with eloquent wisdom, so that the cross of Christ will not be emptied of its effect.

Dr. Todd M. Johnson, Professor of Global Christianity and Mission at Cornwall Theological Seminary, observed several things regarding the institutional church world. “We estimate that Christians are now found in nearly 45,000 denominations.” Think about that - 45,000! These range in size from millions of members to fewer than 100 members and are listed for each of the world’s countries.

Why so many denominations? Throughout the history of Christianity, followers of Christ have struggled to express solidarity and unity. Jesus’ prayer in John 17 was an indication that divisions just might be a problem in the budding Christian community.

The earliest splits occurred over culture, doctrine, and theology. Later splits seemed to be based in the idea that each Christian should decide for themselves what “church” should look like.

A story of a man stranded on a deserted island illustrates one of the issues. After many years, a ship sails close by the island and the man is rescued. The ship’s captain comes ashore, notices three huts that the man built, and asks, “Tell me about these huts.” The man replies, “The first hut is my home, and the second hut is my church.” The captain asks, “What is the third hut?” The man replies, “Oh, that is where I used to go to church.”

We have such a skewed view of what “church” truly is these days. Many want to be the “one in charge” or “the big shot”. They have the attitude “If I can’t get my way or if things don’t go my way I’m leaving. I’ll find someplace else to go. I might even start my own church and do my own thing.”

Whatever happened to church and Christianity being all about Jesus? Our relationship with Jesus is what matters. We need to keep our focus on Jesus. Life would be so much better if we would do this.

Ray
Thanks for taking your time to read and share this blog. If you know of someone who would be encouraged by this blog, please feel free to forward  a link or use the icons below to repost or forward this blog.
Posted by Ray Spellbrink at 8:51 AM No comments:

What Kind Of Boat Are You?

My sister-in-law, Mary, shared the following on her social media page.  I like it and think it is thought provoking and worth pondering

Love the explanation about the motorboat and a sailboat.

Are you pressing forward by your own strength or by His Spirit?

When Nicodemus came to Jesus by night (see John 3:1-11), the Lord revealed an important secret to him.

The wind blows where it pleases, and you hear its sound, but you don't know where it comes from or where it is going. So it is with everyone born of the Spirit

As you know, there are two main types of boats: motorboats and sailboats. Motorboats have to rely on their own energy. They are generally loud and harmful to the environment. Sailboats, however, rely on the breath of the wind to move forward.

As a child of God, you are like a sailboat. You need to “catch the wind” - the wind of the Spirit! You have to let it push you in order to move forward.

It is possible to do everything through Him. Jesus said in Acts 1:8 (CSB), But you will receive power when the Holy Spirit has come on you, and you will be my witnesses in Jerusalem, in all Judea and Samaria, and to the end of the earth.

Ray
Thanks for taking your time to read and share this blog. If you know of someone who would be encouraged by this blog, please feel free to forward  a link or use the icons below to repost or forward this blog.
Check out my website at www.rayspellbrink.com
Posted by Ray Spellbrink at 6:28 PM No comments:

The King Has One More Move

I recently ran across this and thought it was real good. I did some research and found a painting that went with it. I added the last paragraph myself. I hope this blesses you as much as it did me. - Ray

The King Has One More Move!

Two men stand staring in front of a painting in an art gallery.  In the painting, a man is playing chess with the devil. The devil is grinning ear-to-ear because he has the man cornered. The title of the painting, “Checkmate”, indicates that the game is over. The devil has won. His opponent has failed. He has no more moves. 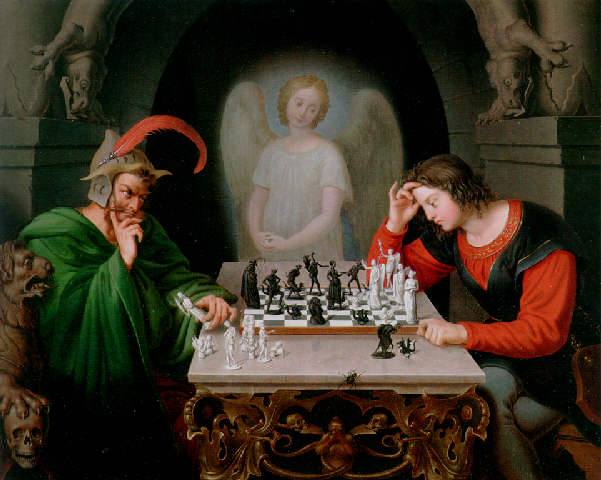 Throughout the Bible, this game has been played:  The Israelites found momentary freedom only to face the formidable Red Sea with Pharoah and his armies in hot pursuit.  The King had one more move!

Daniel was lowered into a den full of hungry lions for defying a tyrant and standing up for his faith.  The King had one more move!

A 9 feet tall fighting champion named Goliath called for a winner-take-all, one-on-one fight to settle the war. A little shepherd boy took him on. The King had one more move!

Jesus was tortured, crucified, and buried for 3 days. But the King had one more move!

Ever feel like life has you beat?  The King has One more Move!

Ever feel like Satan has you trapped? The King has One more Move!

Don’t be discouraged! Don’t give up when you feel cornered or defeated. King Jesus has one more move!

Ray
Thanks for taking your time to read and share this blog. If you know of someone who would be encouraged by this blog, please feel free to forward  a link or use the icons below to repost or forward this blog.
Check out my website at www.rayspellbrink.com
Posted by Ray Spellbrink at 9:57 AM No comments: